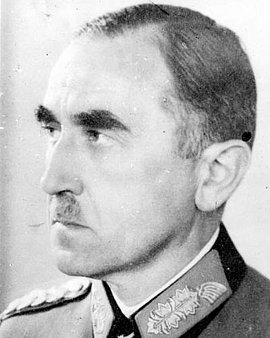 Karl Freiherr von Thüngen was inspector of the Selective Service in Berlin in the summer of 1944. On July 20, 1944 the conspirators appointed him as military commander for military district III (Berlin) after they had arrested the previous commander, General von Kortzfleisch. However, Thüngen did not arrive at the Army Command building until evening, too late to prevent the failure of the coup attempt. He revoked the conspirators’ orders and even participated in Kortzfleisch’s interrogation of Hans-Ulrich von Oertzen, which Oertzen finally escaped by committing suicide. Karl Freiherr von Thüngen was arrested by the Gestapo shortly afterwards, and sentenced to death by the People’s Court on October 5, 1944. By order of the Reich Minister of Justice, Otto Thierack, the sentence was carried out by execution by firing squad in Brandenburg-Görden.