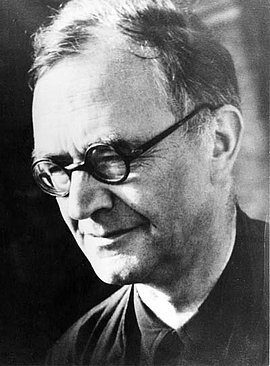 Having grown up in the family of a Basel theology professor, Karl Barth studied theology in Bern, Berlin, Tübingen, and Marburg until 1909. He became a pastor in Switzerland in 1911. After the First World War he established an important new approach in Protestant theology: dialectic theology. In 1921 Barth became a professor in Göttingen, later transferring to Münster and Bonn. A member of the Swiss Social Democratic Party as early as 1915, he joined the SPD in Germany in 1932. In 1933 his thinking influenced many pastors and believers in their will to resist the "German Christians". Barth was very close to the resolute faction of the Confessional Church and was instrumental in drafting the Barmen Theological Declaration of May 1934. When he refused to swear the oath of allegiance to Hitler in 1934, he was dismissed as a university instructor and in 1935 accepted a professorship with the department of theology in Basel. In 1938 the National Socialists prohibited any further publication of his writings in Germany. In a letter to a colleague in Prague that same year, he encouraged Czechoslovakia to offer armed resistance to the threat of National Socialist annexation. In the years that followed, he demanded the same of France, the Netherlands, Great Britain, Norway, and the United States. In 1945 Barth lent his financial support and personal prestige to the aid of the Freies Deutschland (Free Germany) movement in Switzerland. After 1945 Karl Barth resolutely opposed the remilitarization of Germany and nuclear armament in his writings and work.