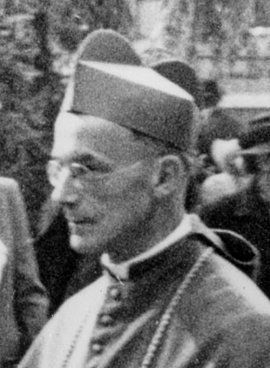 Born in Neuß as the son of a factory owner, Josef Frings grew up in a large family. In 1910 he was ordained as a priest. He studied theology in Rome and Freiburg from 1913 to 1915 and gained his doctorate in 1916. In 1942 Josef Frings was appointed Archbishop of Cologne. His consecration, held in the middle of the war, was turned into a demonstration of Catholic self-assertion. Frings repeatedly spoke out in his sermons in support of persecuted people and against state repression. In a speech to mark the Pope’s coronation ceremony in March 1944, Frings publicly attacked arbitrary arrests, racial persecution and forced divorces. In the fall of 1944 he protested to the Gestapo with written submissions against the deportation of people of Jewish origin from Cologne and the surrounding area. Frings survived the war, and in July 1945 he succeeded Cardinal Adolf Bertram as chairman of the Fulda Bishops’ Conference. In 1946 he was appointed a cardinal by Pope Pius XII.