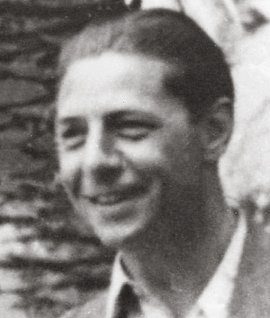 John Sieg was born in Detroit in the United States to a family of German origin. His parents, the mechanic August and the nurse Marie Sieg, had emigrated to America at a young age. After his father’s death in 1910, eight-year-old John accompanied his grandfather on a long visit to Germany. Their stay was extended by the beginning of World War I, during which time John Sieg attended school in Schlochau, West Prussia, up to 1918 and then the state teachers’ seminary in Deutsch-Krone. After his grandfather’s death in 1924, John Sieg returned to Detroit, joined shortly afterward by his later wife Sophie. Various jobs on construction sites and in Detroit automotive factories from the mid-1920s had a lasting social effect on John Sieg. He also continued his education at Detroit City College. Returned to Germany in the spring of 1928, he married Sophie Wloszczynski and began working as a writer in Berlin. Early articles by John Sieg appeared in Tat, by then led by Adam Kuckhoff. The local editor Hermann Grosse recruited him for the Rote Fahne, where he met Wilhelm Guddorf and Martin Weise, joining the KPD in 1929. Imprisoned by the SA from March to June 1933, he then became an organizer of communist resistance in Berlin-Neukölln. He had close contacts to Arvid Harnack and Adam Kuckhoff from the mid-1930s and later took part in leafleting campaigns. Sieg started work for the Deutsche Reichsbahn in 1937. He and his wife were arrested on October 11, 1942. John Sieg hanged himself in his prison cell on October 15, 1942. His wife Sophie was transferred to Ravensbrück concentration camp, where she was liberated by the Red Army on April 30, 1945.