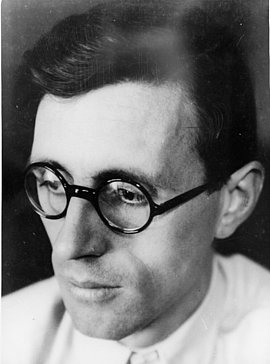 Born in 1898, John Rittmeister was the son of a businessman and grew up in Hamburg. He studied medicine and became a neurologist. At the beginning of the 1930s his political position tended toward liberal socialism. He worked in Switzerland up to 1937, then as a senior physician in the Waldhaus neurological clinic in Berlin, running a polyclinic for psychotherapy in Berlin-Nikolassee from the fall of 1939. During that year he married Eva Knieper, born in Zeitz in 1913, who was preparing for her university entrance level examinations at evening classes. His wife’s school friends, including Fritz Thiel, Ursula Goetze, and Friedrich Rehmer, often met at the Rittmeisters’ home for discussion evenings. The circle had a humanist orientation. At Christmas 1941, the Rittmeisters met the Schulze-Boysens. In conversations with Rittmeister, Schulze-Boysen came to the conclusion that he should address the general public with the “AGIS” leaflet. John Rittmeister and his wife Eva were arrested on September 26, 1942. He was sentenced to death on February 12, 1943, and murdered in Berlin-Plötzensee on May 13, 1943. Eva Rittmeister was sentenced to three years’ imprisonment and released in April 1945.