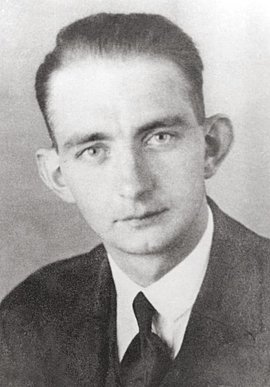 Johannes Prassek grew up in a working-class family in Hamburg and completed his theology studies with great personal sacrifice. He was ordained as a priest in Osnabrück in 1937 and sent to Lübeck as a chaplain in 1939. Prassek, who quickly became extraordinarily popular, made a deep impression on the community with his sermons. He was especially successful in working with young people. He led theological discussion circles where he often openly emphasized the irreconcilable contradictions between the Catholic faith and National Socialist ideology. He also established contact to forced laborers and learned Polish for his ministry work with them. Prassek and the Protestant pastor Karl Friedrich Stellbrink exchanged information from foreign radio stations and leaflets, which Prassek also duplicated and distributed. Johannes Prassek was denounced by a Gestapo informer and arrested at the end of May 1942. He was indicted on June 22, 1943 in the “Lübeck Christians’ Trial”, sentenced to death by the People’s Court the following day and murdered on November 10, 1943 in Hamburg.