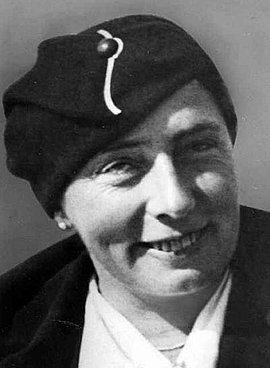 Johanna Kirchner came from a long-standing social democratic family in Frankfurt am Main. At the age of 14 she belonged to the Young Socialist Workers (SAJ). Later she joined the Social Democratic Party (SPD) and worked for the Workers’ Welfare Organization and as a newspaper correspondent at party and labor union congresses. In 1933 an arrest warrant was issued for her while she was on a trip to Switzerland to organize escape assistance for other victims of persecution by the National Socialist regime. She emigrated initially to the Saar region and participated in the preparations for the Saar Referendum but had to flee again in January 1935. She went to Forbach in France near the German border, where she remained closely involved in the struggle of Hitler’s German opponents, and had contact with communist groups. Working at the Advisory Office for Saar Refugees, from 1936 on she published an information journal with Emil Kirschmann. In 1937 she became a member of the Relief Committee for the Saar-Palatinate Region established in Strasbourg. After the beginning of the Second World War, Johanna Kirchner was interned by order of the French government. She was liberated from Gurs camp with the help of French friends, but the Vichy government later extradited her to Germany. From June 9, 1942 on she was subjected to Gestapo interrogation in Germany. In May 1943 the People’s Court sentenced her to 10 years in a penitentiary. In a retrial, Johanna Kirchner was sentenced to death by the People’s Court on April 21, 1944 and murdered on June 9, 1944 in Berlin-Plötzensee.