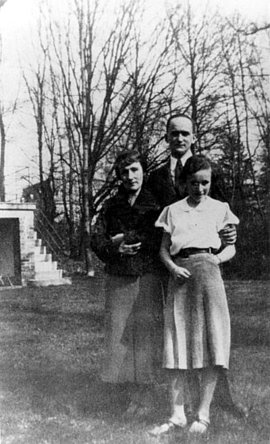 The author Jochen Klepper studied theology and started work for the German Protestant press service in 1927. He thought deeply about religious issues. He married Johanna Stein, a woman from a respected Jewish family, in 1931. Klepper then moved to Berlin and worked in radio. He was dismissed in June 1933, and had to give up another job as an editor at the Ullstein publishing house soon afterwards. Initially, he was able to make a modest living from the profits of his writing. However, the persecution of the Jews threatened his wife and two stepdaughters. The older girl, Brigitte, managed to leave for England in 1939. Klepper became a soldier that same year, until he was dismissed from the Wehrmacht in 1942 because of his “mixed marriage.” He even negotiated with Adolf Eichmann, the head of the Jewish Evacuation Department in the Reich Security Main Office, to protect the stepdaughter living with him. Realizing he could do nothing to help her, Klepper, his wife, and her younger daughter Renate committed suicide in Berlin-Nikolassee on the night of December 10-11, 1942.