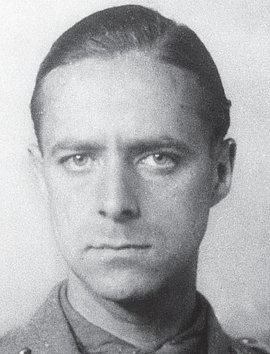 Joachim Kuhn, the son of a Berlin patent lawyer, studied briefly at Karlsruhe Technical University in 1931 before embarking on a career as an officer in October 1932. From May 1942 on, he was assigned to the organization department of the Army General Staff under Major General Hellmuth Stieff. Promoted to the rank of major in 1943, he joined the staff of Major General Henning von Tresckow in the summer of 1944. Kuhn, who was a friend of Stauffenberg’s and engaged to one of his cousins, obtained the explosives for the assassination attempt of July 20, 1944, along with Stieff and First Lieutenant Albrecht von Hagen. At the end of July 1944, he defected to the Red Army to evade prosecution. The Reich Court Martial sentenced him to death in absentia for “deserting to the enemy,” and his superior, Lieutenant General Gustav Heisterman von Ziehlberg, was sentenced to death and shot in Berlin-Ruhleben on February 2, 1945. Kuhn returned from Soviet prisoner-of-war camps to Berlin in 1956.