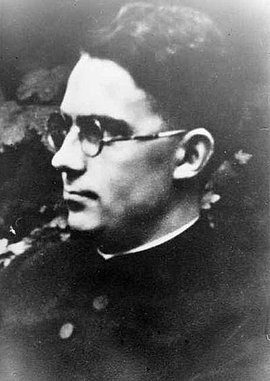 Hermann Lange was born in Leer as the son of a navigation teacher and grew up in prosperous circumstances. Having decided early on to become a clergyman, he joined the Catholic youth movement and consistently opposed National Socialism. After studying theology, Lange was ordained as a priest in Osnabrück in 1938 and appointed as a prelate at the Church of the Sacred Heart of Jesus in Lübeck shortly afterwards. He concentrated on working with young people, and his serious attitude and reliability made a profound impression on everyone he met. Lange was involved in distributing leaflets criticizing the regime, including copies of the sermons of Bishop von Galen. He was arrested on June 15, 1942. Hermann Lange was sentenced to death by the People’s Court in the “Lübeck Christians’ Trial” and murdered on November 10, 1943 in Hamburg.