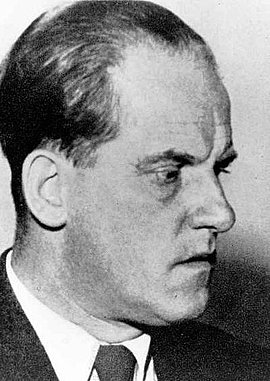 Herbert Wehner grew up in a working-class family in Dresden. As a young man he was a close sympathizer of the anarchist writer Erich Mühsam, and became his private secretary. Wehner joined the German Communist Party (KPD) in 1927 and was elected to the Saxon State Parliament for the KPD in 1930. In 1931 he worked in the organization department of the KPD Central Committee and in 1932 Ernst Thälmann appointed him as his technical secretary. At the end of 1933 Wehner became head of the clandestine Berlin regional leadership of the KPD. After fleeing from Germany he tried to reorganize the communist resistance from abroad in the Saar region and in Prague. He returned to Germany several times for short periods. In 1935 he was expelled by the Czech police and taken to the USSR via Poland. From the time of the Brussels Conference on he was a member of the KPD Central Committee and a candidate member of the Politburo, and also a close colleague of Wilhelm Pieck. In 1940 Wehner was assigned to coordinate the attempts to reorganize the communists in Germany from Stockholm. However, in the spring of 1942 he was sentenced in Sweden for alleged espionage and interned until 1945. He broke with the KPD in prison, and then conclusively after the end of the war, and later became a leading social democratic politician in West Germany. Herbert Wehner died in 1990 in Bonn.