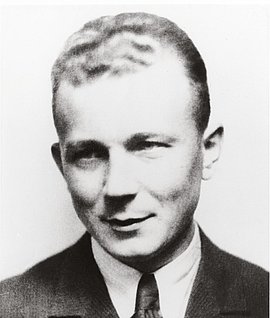 Born in Berlin, Herbert Gollnow was the only son of the musician Reinhold Gollnow and his wife Else. He attended Fichte High School and completed his university entrance level examinations at Easter 1931. He then started work for the Reichsbahn, became a railway inspector on August 1, 1938, and transferred to the Foreign Office that same year. Gollnow, who joined the NSDAP in 1936, took English lessons from Mildred Harnack to prepare for a higher position in the civil service, and studied part-time at the German Academy for Politics from April 1939. In August 1939 Gollnow was appointed consulate secretary. He was also a reserve second lieutenant in the air force from April 1, 1939. He was drafted to the fighter-pilot school at Tutow in June 1940 as a teacher on aircraft types, took part in a paratrooper training course, and was promoted to first lieutenant in the summer of 1941. At Arvid Harnack’s suggestion, Herbert Gollnow continued his studies at the Faculty for Foreign Studies. Through Harro Schulze-Boysen, he was commanded to the Office for Foreign Affairs/Counterintelligence in the Armed Forces High Command in October 1941. During this time in Berlin, he carried out intensive economic studies with Arvid Harnack and discussed the current political and military situation with him. Gollnow’s knowledge was also used to provide information to the Soviets. When the Gestapo’s “Red Orchestra” special commission began investigating the resistance group, Herbert Gollnow was arrested on October 19, 1942, sentenced to death by the 2nd senate of the Reich Court Martial on December 19, 1942, and murdered on the shooting range in Berlin-Tegel on February 12, 1943.