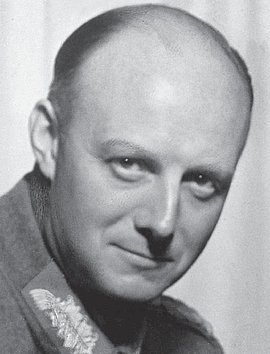 Henning von Tresckow volunteered at the age of sixteen and served in the First World War in 1917-18. In 1920, he left the army and took up the study of law. Four years later, he took over his father's estate in the Neumark region only to join the Reichswehr again two years after that. Tresckow was initially skeptical of the Weimar Republic. He completed training for the General Staff and was married to Erika von Falkenhayn, with whom he had two daughters and two sons. He initially welcomed the National Socialist takeover but became increasingly skeptical of Hitler's policies and finally joined the ranks of the resolute opponents to the regime following the November pogroms in 1938. Tresckow strengthened the connections between the military resistance and Ludwig Beck and Carl Goerdeler and assumed a dominant position among the officers of the opposition. He was conceived that it was necessary to "shoot Hitler down like a rabid dog." He justified the planned assassination as self-defense and regarded the regime opponents' actions as a moral obligation. Tresckow succeeded in finding several fellow officers who were prepared to risk their lives to carry out the assassination that they knew to be necessary. Assigned to the command of Army Group G under General Gerd von Rundstedt as a major in 1939, Tresckow was promoted to lieutenant colonel in 1940 and transferred as First General Staff Officer (Ia) to Army Group B, which in 1941 was renamed Army Group Center in preparation for the German invasion of the Soviet Union. He felt repelled by the ruthless conduct of the war, criticized incapable commanders, and was very well informed about the crimes committed during the "partisan crackdown" and by the "Einsatzgruppen [mobile killing units] of the chief of the Security Police and the SD [Security Service]." Tresckow was promoted to colonel in the General Staff in 1942. From mid-1942 on, he repeatedly tried to organize attempts on Hitler's life but these assassination attempts were repeatedly aborted. Tresckow was transferred to the "Führer's reserve" in late July 1943. In Berlin, he used this opportunity to work together with Claus Schenk Graf von Stauffenberg on the "Valkyrie" plans for a coup. In the fall of 1943, Tresckow was transferred to the southern segment of the eastern front, where in late November 1943 he was appointed chief of staff of the 2nd Army. In 1944, now with the rank of major general, he maintained contact with the conspirators although he was unable to be directly involved in the preparing the coup. Immediately before the assassination attempt of July 20, 1944, Tresckow strengthened Stauffenberg's determination to carry out the assassination attempt. When Henning von Tresckow heard that the coup had failed, he took his own life at the front near Ostrów on July 21, 1944.