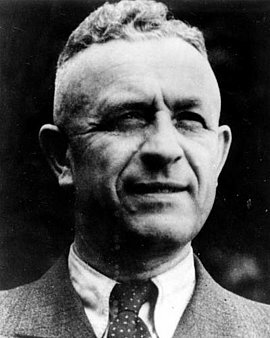 Heinrich Körner joined the Christian labor union movement before 1914. After his return from a Japanese prisoner of war camp in 1921, he resumed his work for the Catholic workers’ unions and was elected West German managing director of the national federation in 1926. He was married to Maria Theresia Dierichsweiler, with whom he had three daughters. In 1933 Heinrich Körner was briefly imprisoned. Even after the labor union federations were smashed in May 1933, he maintained contact with his former comrades. Körner belonged to the Rhine resistance circle around Jakob Kaiser and Bernhard Letterhaus, and let them use his house on many occasions. After the assassination attempt of July 20, 1944, he was arrested on September 1 and questioned about his contact to Kaiser, but soon released again. On November 25 he was arrested again and brought to Lehrter Straße Prison in Berlin two weeks later. On April 6, 1945 the People’s Court sentenced him to four years in a penitentiary. Heinrich Körner was liberated from Plötzensee Prison in Berlin by the Soviet troops, but shot in obscure circumstances on April 26, 1945.