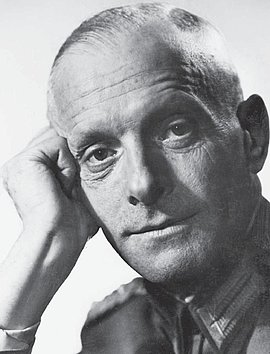 Hans Oster served in the First World War as a General Staff officer and was later among those allowed to remain in service in the Reichswehr, which he left in 1932 for personal reasons. Hans Oster was married to Gertrud Knoop, with whom he had a daughter and two sons. After 1933, Oster was recalled to active duty and served as a Counter Intelligence officer in the Reichswehr. Promoted to lieutenant colonel in 1935 and colonel in 1939, he became head of the Central Department of the Counter Intelligence Office. Oster wanted to overthrow the regime by assassinating Hitler as early as 1938. He assumed key duties in every plan for an uprising or coup attempt and was the focal point of the resistance group in the Counter Intelligence community. In 1940, he informed the Dutch military attaché in Berlin of the impending invasion of the Netherlands by German troops. In 1941, he was promoted to major general and appointed chief of staff of the Office for Foreign Affairs/Counter Intelligence of the Armed Forces High Command. Oster was forced to resign in 1943 because of alleged foreign-currency dealings, after which he remained under Gestapo surveillance. He was designated to become presiding judge of the Reich Military Court following the successful assassination of Hitler. Hans Oster was arrested the day after the unsuccessful coup of July 20, 1944. On Hitler's orders, he was sentenced to death on April 8, 1945, by an SS summary court in the Flossenbürg concentration camp, where he was murdered one day later.