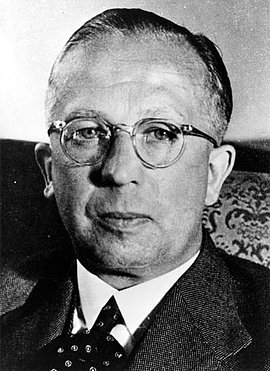 Hans Koch studied law at the University of Königsberg and from 1923 on served in the Prussian Ministry of Trade and later as second state commissar at the Berlin stock exchange. In 1927, he opened a law office and practiced law as an attorney and notary public. He was married to Annemarie Kahle, with whom he had three daughters and a son. Koch belonged to the Confessional Church and defended its members in court. Along with two other attorneys, he won an acquittal for the pastor of the Berlin-Dahlem Confessional parish, Martin Niemöller. During the war, Koch established liaisons with business circles in contact with Carl Goerdeler and the conspirators around Claus von Stauffenberg. Their plans for a new order in Germany after the overthrow of the regime envisioned Koch as presiding judge of the Reich Court. After the unsuccessful attempt on Hitler's life on July 20, 1944, Koch hid one of the conspirators. In January 1945, he was reported by an informer and arrested with his family. Hans Koch was murdered in Berlin by a special unit of the Main Office of Reich Security without a court conviction on April 24, 1945.