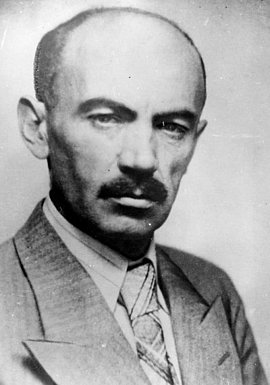 After serving on a mine-seeking ship during World War I, the Munich-born metalworker Hans Beimler was involved in the 1918 revolution in Cuxhaven and the 1919 Munich Soviet Republic. Facing criminal charges for his political activities on several occasions during the 1920s, he quickly climbed the ranks of the Bavarian KPD, becoming a member of the Bavarian state parliament and then the Reichstag in 1932. He was arrested in April 1933 and imprisoned in Dachau concentration camp, where he was severely maltreated. Beimler managed a very difficult escape a few weeks after his arrest. His book Im Mörderlager Dachau was published the same year in Moscow and London, and was one of the first personal accounts of the terror experienced inside Nazi concentration camps. Beimler’s wife and sister were also taken into imprisonment. Hans Beimler himself worked for the KPD in exile in Prague in 1934, running the communist aid organization Rote Hilfe (Red Aid) from Zurich from 1935 on. He was involved in several conflicts with the rigid party bureaucracy, and in the summer of 1936 the KPD removed him from all offices and sent him to Spain on the outbreak of the civil war. In Spain, Beimler set up the German Thälmann Centuria, which soon became the nucleus of the International Brigades’ Thälmann Battalion. Hans Beimler was killed by a bullet of unknown origin during one of the battalion’s first battles near Madrid on December 1, 1936. He was laid to rest at a large public ceremony in Barcelona.