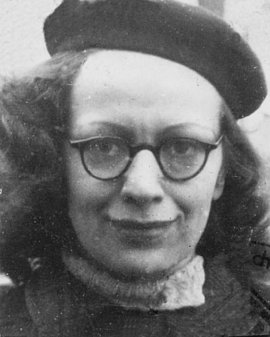 Hannelore Willbrandt grew up with two older siblings in a Social Democratic family. She took part in a discussion circle on art and literature run by the drawing teacher Albert Fehser, which also discussed banned and rejected works, and completed her schooling in 1940. She trained as an assistant bookseller, ending ahead of schedule in October 1942. In mid-1942 she met Heinz Kucharski and Margaretha Rothe, who were customers at the bookshop where she worked, and in February 1943 also Albert Suhr, all of whom were members of the Hamburg White Rose circle. They had regular discussions of National Socialism, society, and war, and about art and philosophy. The friends also listened to foreign radio stations and spread the news they heard there. Through Traute Lafrenz, they received the third White Rose leaflet at the beginning of 1943. Willbrandt and Suhr transcribed the leaflet and the Erich Kästner poem “Little Marching Song” and distributed the copies. Hannelore Willbrandt had to perform Reich labor service and auxiliary war service from June 1943, and was arrested by the Gestapo at the Rickling auxiliary hospital near Neumünster on December 18, 1943, and put into Neumünster police prison. She was taken to Hamburg-Fuhlsbüttel Gestapo prison on December 25, 1943, and spent ten months in solitary confinement. After the preliminary investigation was closed, she and 18 other members of the Hamburg White Rose were transferred to the Hamburg municipal remand prison on Holstenglacis on October 26, 1944. On November 6, 1944, the solicitor general at the Hanseatic higher regional court passed the files of the White Rose prisoners on to the “People’s Court,” whereupon the female White Rose prisoners were transferred via Berlin-Alexanderplatz police prison to Cottbus women’s penal institution on November 10. Hannelore Willbrandt was initially transferred to Leipzig-Kleinmeusdorf prison in February 1945 and from there to St. Georgen penal institution in Bayreuth, where the trials were to be held because the “People’s Court” in Berlin had been destroyed by bombs. The joint charge brought against Hannelore Willbrandt and other Hamburg White Rose members by the senior Reich prosecutor before the “People’s Court” on February 23, 1945, was: “preparation for high treason, aiding the enemy, subverting the war effort, and radio crimes.” Hannelore Willbrandt was liberated in Bayreuth by the U.S. Army on April 14, 1945, while the “People’s Court” in Hamburg was still trying members of the White Rose on April 20.