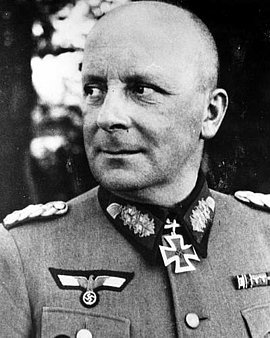 Gustav Heisterman von Ziehlberg was married to Anneliese von Tschischewitz, with whom he had four daughters and two sons. In 1944 von Ziehlberg was divisional commander on the eastern front. A few days after the unsuccessful assassination attempt on Hitler, he received the order to immediately arrest his first general staff officer (Ia) Major Kuhn, and have him brought to Berlin. Kuhn was said to have been involved in obtaining the explosives for the attack of July 20, 1944. Von Ziehlberg informed Kuhn of the accusations and gave him the chance to escape arrest by shooting himself. But instead of committing suicide, Kuhn deserted to the Soviet troops. This resulted in Ziehlberg’s indictment by the Reich Court Martial. In a first trial he was sentenced to nine months' imprisonment. After proceedings were reopened, he was sentenced to death for “deliberate insubordination against an order in the face of the enemy”. He was executed by firing squad on February 2, 1945 in the Murellenschlucht in Berlin-Spandau.