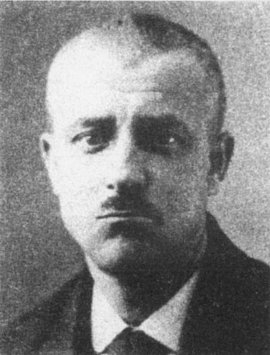 Guido Heym, born in Suhl in 1882, joined the KPD and moved on to the left-wing oppositional Leninbund and later the SPD. Soon after the outbreak of war, Heym set up contacts to Berlin and Thuringia, and met up with the former SPD Reichstag parliamentarian Paul Voigt from Meiningen on several occasions to discuss possibilities for rebuilding social democratic organizations. Voigt reported to Heym on his connections to Max Urich. Suhl-based Social Democrats had been meeting up in the longstanding Vereinigung der Domberg-Wanderer (Association of Domberg Wanderers) since the beginning of the war. Here and in various social democratic circles, it was above all Guido Heym and Robert Gladitz who assessed and passed on information gained from Allied radio broadcasts. Heym also made contact with communist circles in the region. After making contact to Paul Voigt and Max Urich, Heym and Gladitz were betrayed by an informer. 47 people from the Suhl/Zella/Mehlis region were arrested on September 3, 1943. Almost a year later, on June 8, 1944, the Gestapo arrested a further 130 people after Gestapo informers had initiated risky leaflet campaigns and obtained weapons. In December 1944, the Social Democrats Robert Gladitz, Guido Heym, Ernst König, the Communists Adolf Anschütz, Emil and Minna Recknagel, Erhard Schübel and Ewald Stübler, and the unaligned Karl Stade were sentenced to death. Anschütz, König, Stade, and Emil and Minna Recknagel were executed on January 5, 1945. On January 16, 1945, the People’s Court in Zwickau passed a second death sentence against Guido Heym and Robert Gladitz, who had already been sentenced to execution. Fleeing before the US Army, the Gestapo and SS murdered the two men along with 154 other inmates of the Weimar Gestapo prison on April 5, 1945.