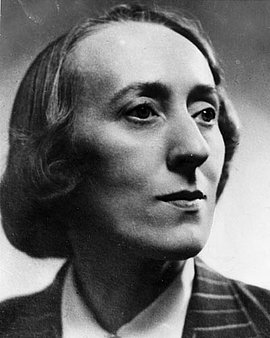 Born in Frankfurt an der Oder, Greta Lorke was the daughter of a musical instrument maker. After obtaining her teacher’s certificate in 1924, she studied political economy and sociology in Berlin and Würzburg. After extended trips abroad she continued her sociology studies at the University of Wisconsin/USA between 1927 and 1929, and worked as a language teacher and translator after her return from the United States. At the beginning of the 1930s her jobs included academic secretary in Karl Mannheim’s office at the Institute for Social Research in Frankfurt am Main; she then worked as a freelance translator until 1942. From 1935 on Greta Lorke lived with Adam Kuckhoff, whom she married in 1937. Their son Ule was born a year later. Adam and Greta Kuckhoff belonged to the friendship and discussion circle around Mildred and Arvid Harnack, whom Greta had met while studying in the United States. In 1940 the Kuckhoffs arranged for the Harnacks to meet Harro and Libertas Schulze-Boysen. Adam Kuckhoff had links to the social democratic resistance and collaborated on several Red Orchestra pamphlets in 1941-42. In June 1941 the Kuckhoffs safeguarded a radio transmitter for the resistance group. Adam Kuckhoff was arrested in Prague on September 12, 1942, sentenced to death on February 3, 1943 and murdered on August 5, 1943 in Berlin-Plötzensee. Greta Kuckhoff was sentenced to ten years in a penitentiary and liberated from Waldheim Prison by the Red Army in May 1945.