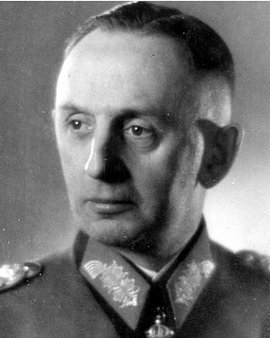 Georg Thomas, the son of a factory owner, joined Infantry Regiment 63 in 1908 as an officer cadet senior grade and became a career soldier. From 1928 on he worked in the Army Ordnance Office in the Reich Ministry of Defense in Berlin, and was largely responsible for the armament economy. From 1939 on he was chief of the Office for Defense Economy and Armament in the Armed Forces High Command. From August 1940 on he was a general of the infantry. Thomas’ precise knowledge of Germany’s military possibilities and their economic limits led him to join the military opposition. He was involved in the plans for a coup against Hitler, particularly in 1938-39. Thomas had close contact to his former superior, Ludwig Beck, and to Carl Goerdeler and Johannes Popitz. When the Armament Ministry under Albert Speer increasingly took over authority, Thomas resigned from his post in November 1942. After the unsuccessful coup attempt of July 20, 1944, documents from the period 1939-40 incriminating Thomas were discovered, and he was arrested on October 11, 1944. Georg Thomas was imprisoned in Prinz-Albrecht-Straße in Berlin, and in Flossenbürg and Dachau concentration camps. He was liberated by American troops on a contingent in South Tyrol, and died in American custody in 1946.