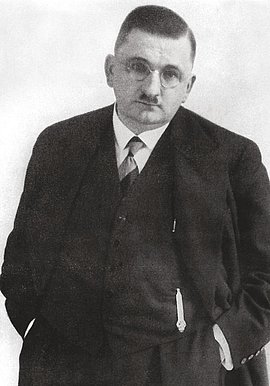 Born in Stettin in 1883, Fritz Gerlich was a historian, archivist, and journalist and edited the Münchner Neueste Nachrichten newspaper from 1920 to 1928. He was very much in favor of uniting national forces. He became a determined opponent of National Socialism in reaction to Hitler’s 1923 putsch attempt. In 1930 Gerlich, who had converted to Catholicism in 1931, took over the weekly newspaper Illustrierter Sonntag, which appeared under the programmatic title Der gerade Weg. Deutsche Zeitung für Wahrheit und Recht (The Straight Path. German Newspaper for Truth and Justice) from 1932. He transformed the newspaper into a combative anti-Nazi publication, hoping to renew political life on the basis of Catholic Christianity and natural law. From the fall of 1932, he repeatedly reported on quarrels among NSDAP leaders and plans for a putsch within the SA. On March 9, 1933, Gerlich was beaten and arrested at work by SA men, and The Straight Path was banned on March 13. After 16 months’ imprisonment, Fritz Gerlich was murdered in Dachau concentration camp on the night of June 30, 1934.