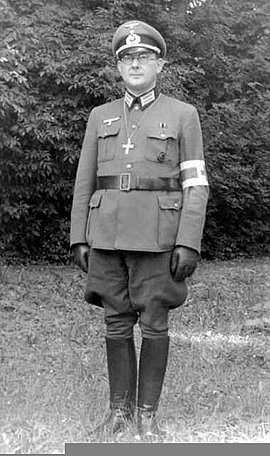 Born in Klein-Freden near Hildesheim, Friedrich Lorenz studied theology and philosophy and was ordained as a priest in 1924. In 1931 he was transferred to work in the People’s Mission at the Stettin branch of his order, the Missionary Oblates of Mary Immaculate. After the German invasion of Poland on September 1, 1939, he volunteered as a Wehrmacht chaplain and consequently learned about the National Socialist crimes against Polish priests. During this period he secretly supported persecuted clergymen on many occasions, and warned them of impending deportation or executions by SS firing squads. After all the regular priests from orders were discharged from the Wehrmacht, Lorenz was transferred to the Chief Church of St. John in Stettin. A victim of the Gestapo action in Stettin against Catholic clergymen and laymen, he was arrested on February 5, 1943. Friedrich Lorenz was sentenced to death by the Reich Court Martial on September 4, 1944 for “demoralizing the troops”. He was murdered with Carl Lampert and Herbert Simoleit on November 13, 1944 in Halle/Saale.