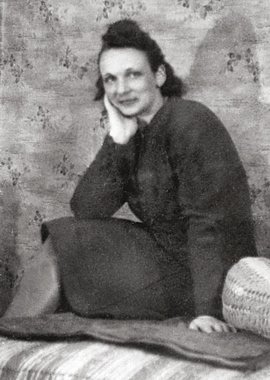 Frida Klaehn started work at the Steinberg hat factory in Luckenwalde at the age of fifteen. She married Hans Winkler in 1928 and their children Horst and Ruth were born in 1929 and 1931. The family moved to Luckenwalde in 1936. Like her husband, Frida Winkler was a determined opponent to National Socialism. In 1943, Hans Winkler and his wife tried to save the family of his Jewish friend Günther Samuel from deportation, but failed. Instead, they hid the 17-year-old Jew Eugen Herman-Friede in their home from August 1943. At the end of September 1943, Hans Winkler met Werner Scharff in Luckenwalde. The two men decided to hide Jews and issue appeals against the war in flyers. Werner Scharff brought in friends and acquaintances from Berlin. The result was the Community for Peace and Reconstruction resistance group, with some twenty members. Frida Winkler was involved in all her husband’s resistance work. When he was arrested on October 14, 1944, the Gestapo searched their home. Frida Winkler and her children were not arrested, however, so she was able to support her husband in prison. As Hans Winkler’s wages were no longer coming in, she relied on financial help from her family. Hans Winkler experienced the liberation in Bayreuth penal institution. Eugen Herman-Friede also survived the war. Werner Scharff was murdered in Sachsenhausen concentration camp in March 1945.