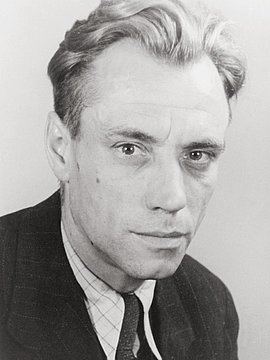 Franz Jacob, born in Hamburg in 1906, grew up in a working-class family and became a machine fitter. He joined the Sozialistische Arbeiterjugend (Young Socialist Workers) and the SPD in 1920, moving on to the Kommunistischer Jugendverband (Communist Youth Federation) and the KPD in 1925. In 1932, he became the youngest member of Hamburg’s state parliament, representing the KPD. Jacob was arrested in Berlin in mid-August 1933 and sentenced to a penitentiary. After serving his time, he was held in Sachsenhausen concentration camp from 1936 to 1940. He got back in contact with his political friends immediately after his release. He found work in a shipyard and soon joined the inner circle of the organization around Bernhard Bästlein. When a wave of arrests began in Hamburg in October 1942, Franz Jacob went underground in Berlin, setting up a new resistance organization with Anton Saefkow from 1943. This group often took its orientation from the radio broadcasts of the National Committee “Free Germany”. It had intermediaries in factories with illegal workers’ groups. However, individuals who kept up contacts with other resistance groups in the Reich, provided victims of persecution with rations cards or identity cards, and made contact to prisoners of war or forced laborers, were just as important. Saefkow and his friends wanted to create as broad a basis as possible for the anti-Hitler resistance. The organization around Saefkow, Jacob, and Bästlein was aware that not all “soldiers of the class struggle” could be won over. They recognized the limitations of the resistance movement: many workers were not willing to rise up against the Nazi regime. They thus agreed that only small and particularly reliable “cadre groups” were to prepare for the day of the attempted coup. The workplace groups were mainly intended to mobilize workers. Franz Jacob was arrested along with Anton Saefkow in July 1944, sentenced to death by the People’s Court on September 5, 1944, and murdered in Brandenburg-Görden on September 18, 1944.