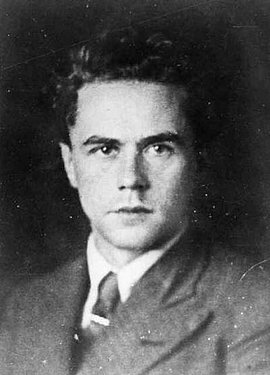 Ferdinand Götze, a pattern maker from Leipzig, joined the German Young Socialist Workers and the FAUD, the German Free Workers Union (Anarcho-Syndicalists), in 1921. He soon became one of the FAUD’s leading functionaries in Saxony. Götze’s wife, Elly Büchner, and their daughter, Annemarie, were also involved in the FAUD. After being imprisoned in a concentration camp in May 1933, Götze took over as leader of the clandestine FAUD in Germany in September 1933. He perfected the conspiratorial network and linked up the main regional centers of the anarcho-syndicalist resistance. Götze had contact to the FAUD groups in exile; he and his comrades published the periodical pamphlet, “Die Soziale Revolution” (The Social Revolution), which had the biggest distribution of all the illegal FAUD publications. At the end of 1934 Götze fled via Czechoslovakia, Italy and France to Spain, where he lived under a false name. During the Spanish Civil War he safeguarded republican contingents. From May 1937 on he was hunted intensively by the Soviet secret police, the GPU. Götze went into hiding and left Spain at the beginning of 1938. Since he failed to obtain a residence permit in Paris, he went to Oslo in the summer of 1938, where he was recognized as a political refugee and received financial support. After the German troops invaded Norway, Götze was forced to flee again. He was interned in Sweden until he received a restricted residence permit in August 1940, and survived the war there. Ferdinand Götze died in 1985.