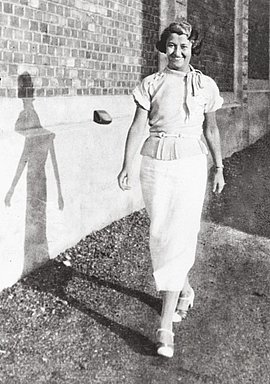 Fancia Glück was born in Galicia. In 1911 her family moved to Berlin, where Fancia completed clerical training. She married the businessman Gerhard Grün in 1928 and was divorced in 1938. Fancia Grün worked as a secretary at the registration office of the Berlin Jewish Community, where she typed the deportation lists. She was thus informed of events in the Jewish Community, as was her friend Werner Scharff. She was still in contact with her former husband Gerhard Grün, who married Ilse Grün at the beginning of 1942. Gerhard Grün and his wife Ilse went into hiding on January 15, 1943, while Werner and Gertrud Scharff and Fancia Grün waited until June 10, 1943, to do so. Where Fancia Grün stayed is unknown. She knew Johanna Schallschmidt, Edith Berlow, and other helpers. After Werner Scharff’s arrest in July 1943, Fancia Grün was also arrested. The two of them were deported to the Theresienstadt Ghetto on August 4, 1943, and escaped along with Abraham Niegho on September 7, 1943. At the end of September 1943, Werner Scharff met Hans Winkler in Luckenwalde. The two men decided to hide Jews and issue appeals against the war in flyers. Werner Scharff brought in friends and acquaintances from Berlin. The result was the Community for Peace and Reconstruction resistance group, with some twenty members. Fancia Grün, who stayed with various group activists, was involved in all Werner Scharff’s resistance work. Later, Werner Scharff and Fancia Grün rented a room in Fürstenwalde under false names. After Werner Scharff’s arrest in Prieros on October 14, 1944, Fancia Grün was also arrested six days later outside Treptow town hall and initially held in Alexanderplatz police prison, where she encountered Gertrud Scharff. Along with the other prisoners, Fancia Grün was transferred to Schulstraße camp in 1945 and then consigned to Theresienstadt again. Fancia Grün was murdered in the Small Fortress in Theresienstadt on March 3, 1945.