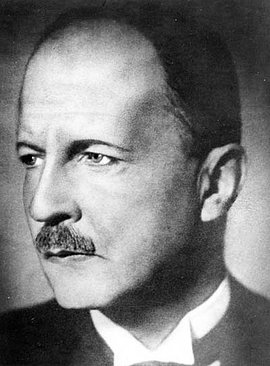 Attorney and estate owner Ewald von Kleist-Schmenzin was a supporter of the German National People's Party and advocated a monarchistic and Christian ideal of conservatism. In the final phase of the Weimar Republic, he resolutely opposed National Socialism. He was arrested twice in May and June of 1933 and released a short time later. Ewald von Kleist-Schmenzin traveled to London in 1938 representing Colonel-General Ludwig Beck and Admiral Canaris to inform the British government of the existence of a German opposition to Hitler. Through his contacts to Winston Churchill and Robert Vansittart, he attempted to bring Great Britain away from its policy of appeasement. Only the British government's credible determination to back Czechoslovakia with military force, Kleist-Schmenzin maintained, would ensure that the German anti-war faction had the support it needed among the generals to move against Hitler. In 1942 and 1943, Kleist-Schmenzin met with Carl Goerdeler and pledged his support for the planned coup. Later he was party to Claus von Stauffenberg's plans and approved of the attempt on Hitler's life, in which his son Ewald Heinrich was actively involved. Kleist-Schmenzin himself was intended to become the political representative for military district II (Stettin). Ewald von Kleist-Schmenzin was arrested on July 21, 1944, after the coup failed. He was sentenced to death by the People's Court on March 15, 1945, and murdered in Berlin-Plötzensee. The criminal investigation involving his son Ewald Heinrich, who on July 20, 1944, was present in the Bendler Block with the conspirators as aide-de-camp under orders from Fritz-Dietlof Graf von der Schulenburg, was dropped on December 12, 1944. Transferred to the front, Ewald-Heinrich was able to survive.