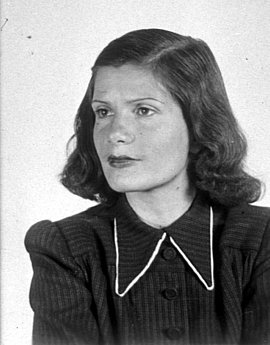 Born in Zeitz in 1913, Eva Knieper was the daughter of a businessman. She trained as a pediatric nurse and went on to work as an office clerk until she completed her university entrance level examinations in 1940. In 1939 she married John Rittmeister, via whom she came to the resistance group led by Harro Schulze-Boysen. In conversations with Rittmeister, Schulze-Boysen came to the conclusion that he should address the general public with the “AGIS” leaflet. John Rittmeister and his wife Eva were arrested on September 26, 1942. He was sentenced to death on February 12, 1943, and murdered in Berlin-Plötzensee on May 13, 1943. Eva Rittmeister was sentenced to three years’ imprisonment and released in April 1945.