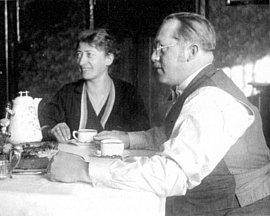 Eugen Grimminger, the son of a train driver, volunteered for World War I and returned home a convinced pacifist. A trained auditor, he married Jenny Stern in 1922 and the couple moved to Stuttgart-Untertürkheim in 1926. Jenny and Eugen Grimminger rejected National Socialism from the very beginning. Because his wife was Jewish, Eugen Grimminger had to leave his job with the cooperative association in 1935 and went on to work as a self-employed auditor. He helped victims of racial and political persecution to escape to Switzerland. In 1942 Eugen Grimminger took over a bookkeeping office from Robert Scholl and provided his son Hans Scholl with large sums of money for the White Rose on several occasions. Eugen Grimminger was arrested on March 2, 1943, sentenced to ten years in a penal institution for high treason by the “People’s Court” on April 19, 1943, and imprisoned in Ludwigsburg penal institution until April 1945. His wife Jenny was murdered in the Auschwitz-Birkenau extermination camp, presumably on December 2, 1943.