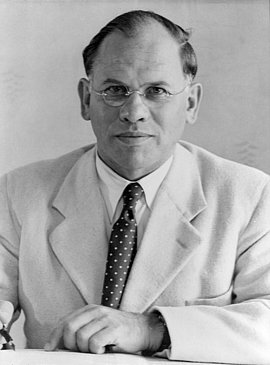 Born in Württemberg, Eugen Gerstenmaier learned the trade of textile merchant before studying theology and philosophy in Tübingen and Rostock. Active in the Christian Youth Movement and in the struggle to defend the Church against the “German Christians” in 1933-34, he was briefly held in custody in Rostock. After gaining his doctorate and working as a curate, from 1936 on he worked in the Church Office for External Affairs under Bishop Theodor Heckel in Berlin. Because he was still able to make foreign trips after 1939 as head of the Ecumenical Office, Gerstenmaier was rapidly seen as an important helper in the opposition circles in the Foreign Ministry. He was introduced to the Kreisau Circle by Hans Bernd von Haeften and Adam von Trott zu Solz and attended the second and third major Kreisau conferences. On July 20, 1944, Gerstenmaier was present in the Bendler Block in Berlin with Peter Graf Yorck von Wartenburg to provide active support to the coup attempt. In his trial at the People’s Court Gerstenmaier succeeded in defending himself skilfully against the charge of high treason. He was sentenced on January 11, 1945 to seven years in a penitentiary, but liberated from Bayreuth Penitentiary by American troops at the end of the war. In 1945 Gerstenmaier took up a post in Stuttgart as head of the Aid Office of the Protestant Church in Germany (EKD). He became a politician in the Christian Democratic Party (CDU) and was president of the German Parliament from 1954 to 1969.