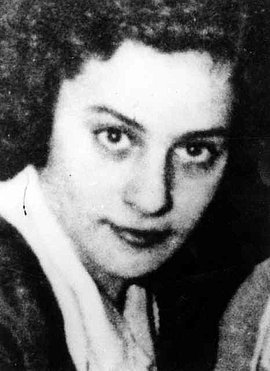 Deported to Auschwitz concentration and extermination camp, Ester Wajcblum, born in Warsaw in 1924, worked in the Metall-Union metal factory as a prisoner. She managed to steal gunpowder at work and smuggle it into the camp, where she was in contact with the Jewish underground movement. On October 7, 1944, special detachment prisoners blew up Crematorium III of Auschwitz extermination camp, killing four SS men and injuring several others. After the special detachment’s attempted revolt, Ester Wajcblum was interrogated and beaten, but did not betray her secret. During the interrogation of one of her fellow conspirators, the SS later found out that Ester Wajcblum had smuggled explosives. She was publicly hanged along with other conspirators, including Rosa Robota, on January 5, 1945.

Years after Ester Wajcblum’s murder, one of her fellow prisoners reported:

“Around the spring of 1943, a transport came from Warsaw, including two sisters – Ester and Hanna Wajcblum... They were forbidden from meeting up with other prisoners in the camp, but I still had contact to the two sisters in secret. One day Ester Wajcblum handed me a small, light parcel, asking me to keep it safe until she came for it or sent someone else... A few days later, Rosa Robota, who worked in the clothing section, came to me and asked for the parcel. This happened several times... I later found out that the parcel contained gunpowder smuggled out of the Union factory. Ester never spoke about it, only once did she say to me: ‘We could free ourselves from this hell...’”