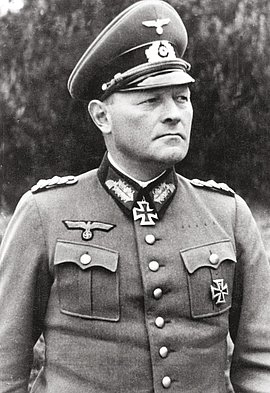 Erich Hoepner began his military training in Metz in 1905, becoming chief of the General Staff of military district I in Königsberg in 1933, and was transferred to the General Staff in Berlin two years later. There he met the chief of the General Staff, Ludwig Beck, and became involved in plans by the military opposition grouped around Franz Halder to remove Hitler through a coup in 1938.
Hoepner was an unconditional supporter of the war against the Soviet Union. He regarded it as a "defense of European culture against Muscovite Asian inundation, resistance against Jewish bolshevism." In August 1941, he called for the use of poisonous gas against partisans. On November 12, 1941, Hoepner ordered the troops under his command to execute all "elements suspected of partisan activities" by shooting, and banned them from taking such suspects to collection points for prisoners of war.
In January 1942, Hoepner ignored Hitler's command to hold out before Moscow, and withdrew his troops. He was immediately removed from his post as commander-in-chief of the 4th Panzer Army, and expelled from the Wehrmacht a day later. Hoepner soon renewed his connections to the military opposition, meeting Friedrich Olbricht and Ludwig Beck on several occasions in the following months and later also Stauffenberg. In the conspirators' plans for the coup, he was allocated the role of "commander-in-chief in the home war territories" on July 20, 1944. After the coup failed, Hoepner was sentenced to death by the "People's Court" on August 8, 1944, and murdered the same day in Berlin-Plötzensee.