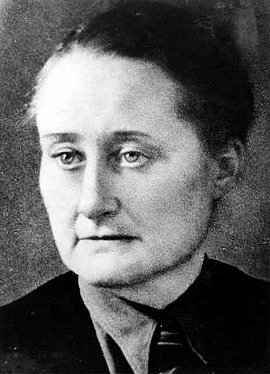 The Protestant educationalist Elisabeth von Thadden set up a boarding school for girls at Schloss Wieblingen near Heidelberg in 1927. The authorities withdrew the necessary permission to run the school in 1941, for political reasons. Von Thadden then moved to Berlin, making contact with the circle around Hanna Solf and members of the Confessional Church. She worked for the German Red Cross in various positions from 1942, finally running soldiers’ homes in France. Elisabeth von Thadden criticized the Nazis’ crimes in private and provided help for persecuted Jews. She was betrayed by a Gestapo informer following a tea party she held on September 10, 1943, at which Hanna Solf, Otto Carl Kiep and Arthur Zarden were among the guests. Elisabeth von Thadden was arrested on January 13, 1944, imprisoned in Ravensbrück concentration camp, and sentenced to death by the People’s Court on July 1, 1944.

Her time in the concentration camp and the death sentence did not affect the strength of her convictions. During her imprisonment she wrote: "We wanted to provide social aid at the moment when that aid was needed. We wanted to be good Samaritans." Elisabeth von Thadden was murdered in Berlin-Plötzensee on September 8, 1944.