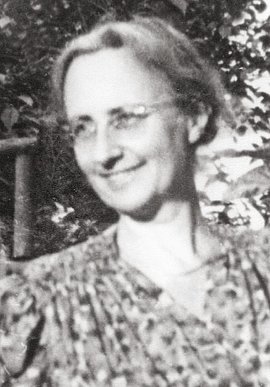 Elisabeth Schmitz taught German, history, and Protestant religious education at the Luisen girls’ secondary school in Berlin from 1929 on. In 1935 she was transferred to Berlin-Lankwitz as a disciplinary measure. She took voluntary early retirement on April 1, 1939, because she refused to teach according to National Socialist principles. Schmitz was active in the Confessional Church. Not least through her close friendship with Martha Kassel, a Protestant doctor of Jewish origins who emigrated in 1938, Schmitz was very well aware of the Nazi regime’s anti-Jewish measures, and considered her church had a duty to stand by the victims of this persecution openly. In her 1935/36 memorandum “On the Situation of the German Non-Aryans,” she called on the Confessional Church to take a public stand against the persecution and in favor of people of Jewish origin. She warned of a further increase in anti-Jewish measures. However, the church’s management committees did not heed her written warnings. After the 1938 November pogrom, she substantiated her position but even then was unable to prompt unanimous and pro-active protest by the Confessional Church. Along with a circle of former fellow teachers and pupils, Schmitz provided help for Jews living in hiding after the mass deportations began, housing some temporarily in her own home. In 1943 Schmitz returned to her hometown of Hanau, where she survived the end of the war.