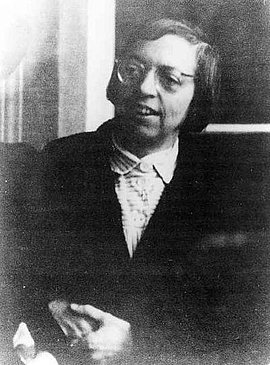 In the First World War, Elisabeth Pungs worked as a nurse in a military hospital, where she contracted a serious lung disease. In the Weimar period she was politically active on welfare issues, such as Paragraph 218 of the Code of Criminal Law, which deals with abortion. She developed strong sympathies with the German Communist Party (KPD) and joined the communist prisoners’ aid organization Rote Hilfe (“Red Aid”) in 1931. Starting in the mid-1930s, she offered her apartment as a meeting place for illegal discussion circles of opponents of the National Socialist regime. In the fall of 1937, Hanno Günther joined Elisabeth Pungs’ circle; she had a strong political influence on him in the following years. In the fall of 1939, Pungs and Hanno Günther drafted their first leaflet, using the jargon of old National Socialist Party (NSDAP) members. The leaflet pointed out that the population was becoming increasingly dissatisfied. Up to the end of 1939, Pungs and Günther also pasted seven or eight different handbills against the war in public places. In 1940-41 they produced and distributed several issues of the leaflet Das Freie Wort (“The Free Word”). In the summer of 1941 the Gestapo arrested Pungs, Günther and their fellow activists. Elisabeth Pungs was not brought to court with the circle around Günther. She was spared the trial before the People’s Court because of a serious illness, but died only a few weeks after the end of the war.