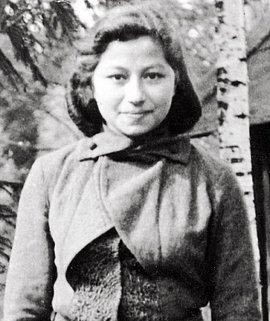 Elisabeth Guttenberger (shown here with her cousins shortly before her deportation) grew up in a Stuttgart Sinti family. She and her three siblings had an idyllic childhood. Their father sold string instruments and antiques, and the family moved to Munich in 1936. The “Nuremberg Race Laws” drastically changed the family’s situation. Although Elisabeth Guttenberger was a good student, she was not allowed to attend high school. She also had to give up an apprenticeship in a pastry shop and was then made to perform forced labor in an ammunition factory. Elisabeth Guttenberger was deported to Auschwitz-Birkenau extermination camp along with her family in March of 1943. After six months she was put to work in the prisoner administration office, where she had to keep the “main book,” a register of all men imprisoned in the “gypsy camp.” These books later testified to the thousands of murders of Sinti and Roma. Elisabeth Guttenberger survived the end of the war. More than thirty of her relatives were murdered in Auschwitz-Birkenau extermination camp.