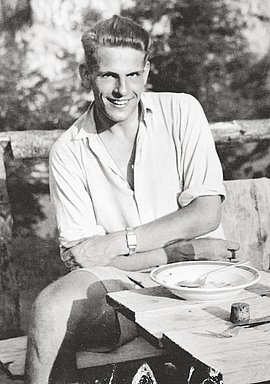 Born in Murnau/Upper Bavaria in 1919, Christoph Probst began a medicine degree in Munich after his labor and military service in 1939. He had been a close friend of Alexander Schmorell since 1935. In 1941 Christoph Probst married Herta Dohrn, with whom he later had three children. Alexander Schmorell introduced Probst to Hans Scholl and his group of friends in the summer of 1942. Although he was transferred to Innsbruck in December 1942, he was actively involved in the discussion of the fifth White Rose leaflet on his visits to Munich and was also prepared to write his own flyer. After Sophie and Hans Scholl were arrested, the Gestapo found a draft leaflet written by Probst in Hans Scholl’s jacket pocket, stating: "Hitler and his regime must fall so that Germany may live on." Christoph Probst was arrested in Innsbruck on February 20, 1943 and sentenced to death by the People’s Court together with Hans and Sophie Scholl on February 22, 1943. That same day, shortly before his execution in Munich-Stadelheim Prison, Christoph Probst received the Catholic baptism. Probst’s father-in-law, Harald Dohrn, was murdered by the National Socialists in Perlach Forest near Munich during the last days of the war on April 29, 1945, for praising the foundation of the Bavarian resistance group "Freiheitsaktion Bayern".