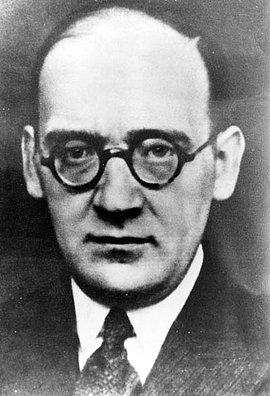 Bernhard Letterhaus grew up in Barmen and after serving an apprenticeship in a textile factory attended advanced technical school for textile design. He became active in the Catholic labor movement at an early age. After serving in the First World War, he was active in the Central Association of Christian Textile Workers. In 1927, he assumed the position of secretary in the central office of the Catholic Labor Movement in Mönchengladbach at the request of Otto Müller, chief executive officer of the Verband Katholischer Arbeiter- und Knappenvereine Westdeutschlands (Association of Catholic Workers' and Miners' Organizations of Western Germany). In 1928, the association's board of directors moved to the Ketteler-Haus in Cologne. This brought Letterhaus into constant contact with Nikolaus Gross. Letterhaus, who had a daughter with his wife Grete Thiel, represented the Center Party in the Prussian parliament. Because he opposed the Prussian Enabling Act, he boycotted the vote on the bill in the Prussian parliament in March 1933. Letterhaus also criticized the Concordat because he believed it would not offer sufficient protection to the institutions of political Catholicism. In spite of this, he was successful in keeping his own association alive until 1938. After the war began, Letterhaus was drafted into military service, and in 1942 he was transferred to Armed Forces High Command in Berlin. Here he established contact with the conspirators around Ludwig Beck and Carl Goerdeler. At the same time, he made his home in Cologne available to political friends such as Jakob Kaiser, Alfred Delp, Nikolaus Gross, and Heinrich Körner for discussions about a new order in Germany. Letterhaus was willing to assume the office of political representative for military district VI (Münster) in the event of a successful coup. A few days after the unsuccessful assassination attempt of July 20, 1944, Bernhard Letterhaus was arrested. He was sentenced to death by the People's Court on November 13, 1944, and murdered one day later in Berlin-Plötzensee.