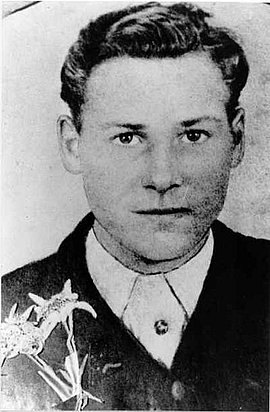 Bartholomäus Schink grew up in a family of five children; their father was a post office worker in Cologne. Although Bartholomäus Schink belonged to the Hitler Youth, as a 16-year-old he often met up with young people from Cologne who identified with the Edelweißpiraten (Edelweiß Pirates), a loosely organized youth culture movement. In the late summer of 1944 Schink and his younger friend, Günter Schwarz, joined an illicit group around Hans Steinbrink, an escaped prisoner from a concentration camp. The group members practiced stealing goods in the bombed city, and later also stored weapons and explosives. They were hoping to be able to fight as partisans in the “final battle”. In conflicts with the Gestapo they fired pistol shots at local National Socialist leaders and police officers, but ended up shooting innocent passers-by as well. Bartholomäus Schink and Günter Schwarz were arrested and severely maltreated in custody. They were publicly hanged without trial with other condemned people in Cologne on November 10, 1944.