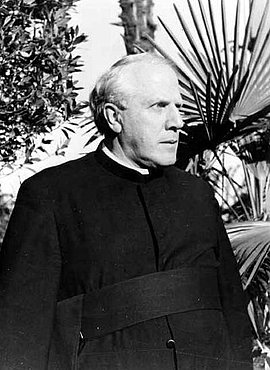 Augustin Rösch grew up in a Catholic family and joined the Jesuit order at the age of 18. He was ordained as a priest in 1925. From 1928 on he was prefect general, later rector of Stella Matutina, the Jesuit school in Feldkirch. From 1935 he held the post of Jesuit Provincial of the Jesuits’ Upper German Province. Rösch was repeatedly forced into conflict with the National Socialist state, which persecuted the Jesuits relentlessly. He continually supported his fellow Jesuits by maintaining silence in the face of questioning, and tried to achieve the upholding of Church rights. Rösch met Helmuth James Graf von Moltke in 1941 and introduced Alfred Delp to the Kreisau Circle shortly afterwards. Moltke hoped that the two Catholic clerics would contribute ideas for smoothing out the contradictions between the different Churches so that the plans for reorganizing Germany could be based on broad Christian principles. Rösch influenced many discussions in the Kreisau Circle on issues related to religion and cultural policy. He also advised members of the circle on how to act in the event of arrest and interrogation, and was able to establish important links to the Catholic resistance. After the unsuccessful coup attempt of July 20, 1944 Rösch initially evaded the clutches of the police. Hunted by the authorities from September 1944 on, he was eventually tracked down. On January 11, 1945 Gestapo officers surrounded his hiding-place and arrested him. Severely maltreated during interrogation, Augustin Rösch was imprisoned in Lehrter Straße Prison in Berlin, but released on April 25, 1945, shortly before the invasion of the Soviet Army. He survived the war.