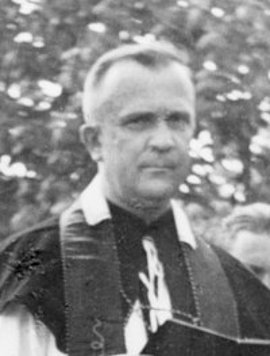 Born in Königshütte in Upper Silesia, August Froehlich grew up in a prosperous merchant’s family. He began studying philosophy in 1912 but had to break off his studies for five years in 1914 due to his military service in the First World War. After being seriously wounded and held as a prisoner of war he was finally able to complete his studies. In 1921 he was ordained as a priest and worked for several years as a chaplain in Berlin. In 1932 he took over a pastorate in Pomerania. Froehlich spent a large part of his family inheritance supporting people in need. After 1933 the National Socialists attacked him in the local press because he did not participate in collections for the Winter Relief Fund. When he gave a full written explanation for his principled rejection of the Hitler salute, he was subjected to questioning, house searches and fines. In 1937 Froehlich was transferred to Rathenow in the Mark Brandenburg region. In 1941 he protested several times about the maltreatment of Polish forced laborers in various firms. As a result he was eventually arrested and imprisoned in Buchenwald, Ravensbrück and Dachau concentration camps. Completely debilitated by the conditions of imprisonment, August Froehlich perished on June 22, 1942 in Dachau concentration camp.