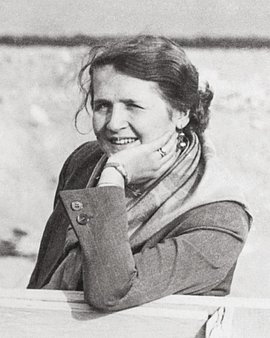 The daughter of a school director, Annedore Leber was taught privately by her father and began a law degree in Munich in 1922. She broke off her studies during the fifth semester and trained as a dressmaker, completing her master examination in 1935. In 1927 she married Julius Leber and joined the SPD. When her husband was arrested in 1933, she continually campaigned for his release. She earned a living for herself and her two children through dressmaking work and by running a fashion studio. In 1938 she became department head for pattern production at the Deutscher Verlag publishing house. After her husband was released from Sachsenhausen concentration camp in 1937, she supported him in his resistance activities and maintained contacts with resistance groups. She was aware of all her husband’s activities. Both her husband’s coal merchant business and her office at the Deutscher Verlag served as contact points. Following Julius Leber’s arrest in July 1944, Annedore Leber and her children were put into Moabit remand prison from August until the end of September, 1944, held in “Sippenhaft” for his activities.