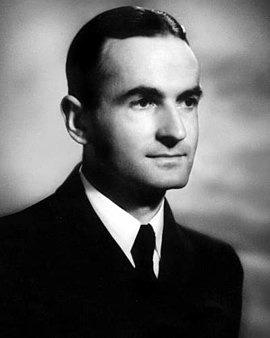 Alfred Kranzfelder joined the Reich Navy in 1927 and initially served in sea formations in the following years. In February 1940 he was transferred to Berlin for health reasons and worked in the Operations Department of the 1st Sea War Branch of the Naval High Command. Here he met the senior naval staff judge Berthold Schenk Graf von Stauffenberg, whose brother Claus Schenk Graf von Stauffenberg later tried to assassinate Hitler. As liaison officer to the Foreign Ministry, Kranzfelder gained insight into the war situation and his discussions with the Stauffenberg brothers soon convinced him that the National Socialist state had to be eliminated. Although he only had limited opportunities to support the coup, Kranzfelder offered his services for its planning. Immediately after the failure of the assassination attempt of July 20, 1944, the Gestapo arrested Berthold von Stauffenberg. Shortly after, the pursuers learned of Kranzfelder’s involvement. He was arrested on July 24, 1944, sentenced to death by the People’s Court two weeks later and murdered on August 10, 1944 in Berlin-Plötzensee.