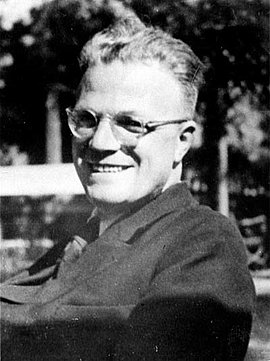 Born in Mannheim as the oldest of six children to Catholic and Protestant parents, Delp decided in favor of Catholicism at the age of fourteen. The youth movement decisively influenced his inner development. His decision to become a Jesuit sprang from his desire to break out of bourgeois conventions and to consciously devote himself to serving his neighbors. After studying philosophy and theology, Delp served as a youth worker and was ordained as a priest in 1937. He was the editor of the renowned Catholic periodical Stimmen der Zeit until it was prohibited in 1941. After this, he devoted his energy exclusively to his duties as a parish priest in Munich. Augustin Rösch initiated him into the Kreisau Circle, and in 1942 to 1943 he was an avid participant, helping to ensure that basic premises of Catholic ethical teachings were incorporated into the plans for a new order. He attended the second and third Kreisau conferences and presented essays on the issue of the workers and on the farmers. However, he was more than merely a thinker and philosopher, and also established contacts between individual Munich resistance circles and the group around Moltke. On July 28, 1944, Delp was arrested in Munich. He was sentenced to death by the People's Court on January 11, 1945, and murdered on February 2, 1945, in Berlin-Plötzensee.