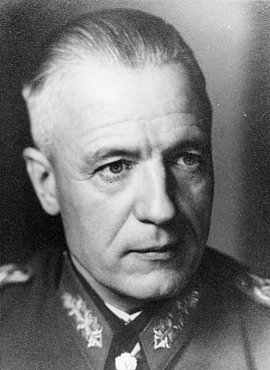 In the summer of 1943, high-ranking Soviet officers and leading communist emigrants, along with military members of the board of the National Committee “Free Germany,” (NKFD) attempted to persuade the German officers captured in Stalingrad, especially the generals, to publicly reject Hitler. After some hesitation, a number of the captured generals declared that Hitler had betrayed them. In view of the lost war and out of concern for the existence of the German Reich, they decided to work with the Soviets and the NKFD. The founding meeting of the Federation of German Officers took place in Lunevo in September 1943, chaired by the artillery general Walther von Seydlitz, who was considered a particularly skilled military man. Seydlitz had realized in the late fall of 1942 that the German troops would be unable to hold Stalingrad. For him, however, the defeat of the Sixth Army was not only the turning point of the war, but also proved the lack of responsibility and the incapability of Germany’s leaders. He no longer felt bound to honor his oath to Hitler. Many people regarded his call to overthrow Hitler to put an end to the war as a “dishonorable betrayal.” Seydlitz was sentenced to death in absentia by the Reich Court Martial in 1944. His family was put into “Sippenhaft” (imprisonment for families held responsible for the oppositional political activities of a family member). He refused to declare loyalty to Stalin, and was sentenced to death as a war criminal in the Soviet Union in 1950. His sentence was commuted to 25 years’ imprisonment, and he was released in 1955.