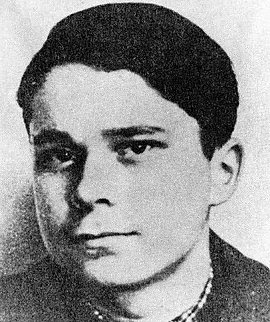 The Munich apprentice mechanic Walter Klingenbeck gathered a circle of young Catholics around him in 1941. The friends all rejected the Nazi regime. Klingenbeck, Daniel von Recklinghausen, Hans Haberl, and Erwin Eitel built a small radio transmitter and spread opposition news, which they gathered by listening to foreign "enemy radio stations." They planned to drop flyers they had written from a remote-controlled model plane. Klingenbeck painted the Allies' victory sign in blackoil paint on walls and street signs. He was sentenced to death by the "People's Court" in September 1942 and murdered in Munich-Stadelheim on August 5, 1943. His friends were also sentenced to death, but had their punishment reduced to eight years of penal servitude.

Directly before he was murdered, Walter Klingenbeck wrote to Hans Haberl: "Dear Jonny, I have just heard about your pardon. Congratulations! My appeal has been rejected, though. Ergo, time's up for me. Don't take it too badly. You've got through, after all. That's worth a lot. I've just received the last rites and am calm and collected. If you want to do something for me, say the Lord's Prayer a few times. Goodbye. Walter"