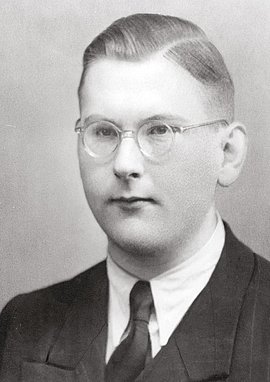 Robert Limpert firmly rejected National Socialism from a young age. In 1943 he and a friend were accused of damaging blackout curtains and writing subversive slogans on the blackboards while on night watch at their school. Both boys were expelled. Limpert completed his schooling in Erlangen and then attended seminars on philosophy. He was drafted into military service in early March 1945. Suffering from a severe heart condition since his childhood, he had a heart attack during an air raid eight days later and was dismissed as unfit for service. He returned to his hometown of Ansbach, where commander Ernst Meyer ordered measures to defend the city against approaching Allied troops. Meyer was determined to defend Ansbach down to the last man. Limpert wrote and duplicated several flyers calling on the citizens to surrender the city without a fight, and posted them to walls and doors during the night. On April 18, 1945 Hitler Youths observed Limpert cutting a telephone cable between the recently abandoned local commander’s headquarters in Ansbach Palace and the troops posted outside the city. He was denounced and arrested. The local commander Ernst Meyer convened a drumhead court martial at which he passed the death sentence and then carried it out himself. Robert Limpert was hanged from the Ansbach town hall gate only hours before U.S. Army troops captured the city.