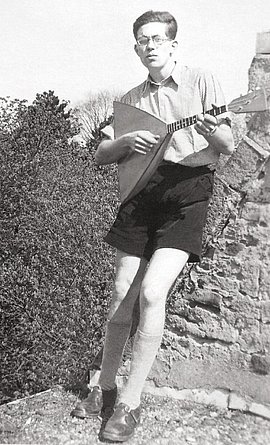 Michael Jovy was born into a Catholic family. His father was the lord mayor of Gladbeck in the Ruhr region, a non-affiliated politician who supported the republic. After his father’s death in 1932, his mother Eleonore moved to Bonn with her three children. Michael Jovy attended high school there and joined the Catholic Federation New Germany in early 1933. In 1935/36, however, he turned to scouting groups in the tradition of the dj.1.11 movement. He held frequent social evenings at his mother’s house and went on trips with his group – as a scout leader – to East Prussia and Luxemburg. Michael Jovy joined the “Hitler Youth” in 1937 but was expelled six months later because he had organized a trip to East Prussia that was considered too “bündisch.” He then joined a circle of friends from the Catholic youth movement, like himself. They spend their free time together, going on trips or organizing musical evenings. The group was in contact with the emigrant Karl Otto Paetel in France, a veteran of the youth movement. Michael Jovy in particular was convinced by his arguments against the Nazi regime. On their return to Bonn, the group began holding educational evenings and Michael Jovy took over as its leader. Michael Jovy was arrested in December 1939 and sentenced to six months in a penal institution. He was put into Siegburg penal institution and sent to the front in 1944 with one of the 999th Division’s “probationary units.” He deserted to American troops on November 1, 1944. After the war he joined the diplomatic service and was an ambassador for the Federal Republic of Germany.